Types of Outlets (For Beginners) 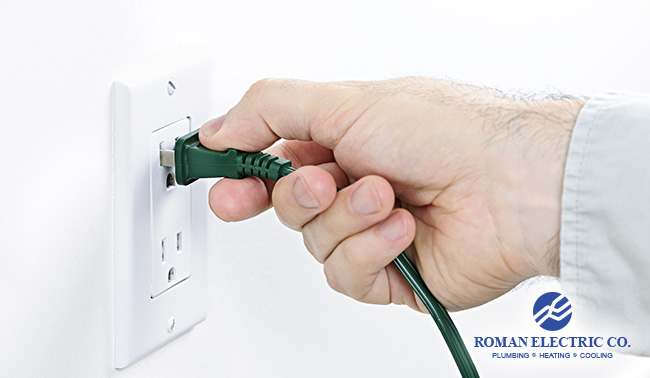 We all know the basics of an electrical outlet. After all, you use them in your home every day. But beyond the most common, there are different variations available, each with a unique function. If you plan on installing new outlets in your Milwaukee home, Roman Electric recommends doing research on the different options that are available. However, to begin your education, we have assembled a beginner’s guide with the basics. Whether you’re looking to install new outlets or would just like to learn more about them, we have listed the types of outlets available in your home.

Two-Prong Outlet –  As the name suggests, this outlet posses two prongs on each plug, lacking a ground wire. Without a ground wire, two-prong outlets are considered outdated and dangerous, but to upgrade them, your home’s electrical system must possess ground wires. Albeit a norm in older homes, don’t rely on them unless your home cannot install a three-prong design.

Three-Prong Outlet – The modern standard, three-prong outlets possess the original two-prongs, along with a third prong for grounding. Most other variants on this list follow the three-prong design, although there are a few exceptions.

20A Outlet – A stronger version of the three-prong outlet. Most outlets carry 15 amps, which is usually enough for most appliances, but 20A (or 20 amp) outlets have the available power for larger items such as power tools. 20A carry about 25% more electrical load than regular counterparts. Found in some garages along with commercial buildings, these outlets can be identified by a horizontal slit placed on one of the prongs.

120-240 Volt Outlets – The strongest outlets in your home. Voltage can range from 120 to 240, and they are used for major appliances such as washers, dryers, and ovens. These outlets come in both three-prong and four-prong types, with the fourth prong acting as a neutral pathway. However, three-prongs are no longer deemed up-to-code, and four prongs are required to comply with NEC guidelines. These outlets are easily identified by their large, black casing.

GFCI Outlet – Also known as Ground Fault Circuit Interrupter, GFCIs are three-prong outlets with an added safety mechanism to prevent shock. When a current is too strong or on an unintended path, a GFCI quickly shuts off power to lessen the severity of the shock. NEC requires GFCI protection in kitchens and bathrooms, and they are easily identified by their “reset” and “test” buttons between the two plugs.

USB Outlet – These three-prong outlets come fitted with additional USB ports located on the side of the plugs. Great for charging devices without the power adaptor.

Split Circuit Outlets – The plugs on these outlets are connected to two completely different circuits. The use of split circuit outlets is when you need to power larger devices on the same outlet without causing an overload.

Tamper-Resistant Outlet – These three-prong outlets possess shutters located inside the plugs that block children from inserting objects into one of the prongs. The only way these shutters will open is when all prongs are inserted at the same time. An essential safety precaution, the NEC requires these outlets in new or renovated homes. These outlets can be identified by the shutter located inside the plugs.

Rotating Outlet – Simply put, rotating outlets possess the traditional three-prongs, but can rotate 360 degrees. With this, you can plug in your appliances and devices at almost any angle.

Switched Outlet – Unlike other three-prong outlets, switched outlets only possess one plug instead of two. Where second plug would be, a light switch is now present. Consult with a professional to determine if your electrical system allows these outlets to be installed.

Smart Outlet – These three-prong outlets allow active control and scheduling via smart phone. With smart outlets, you can turn off appliances, optimize your security system, and cut down on energy usage.

By using our beginner’s guide, you can easily decide on the right outlet for your home! If you are ready to install your new electrical outlets, contact Roman Electric today! Being the leading electrical company in Milwaukee, our outlet services power your home up the way you want it! Give us a call at 414-771-5400 to schedule an appointment and get started!