Why You Should Choose Christmas LED Lights 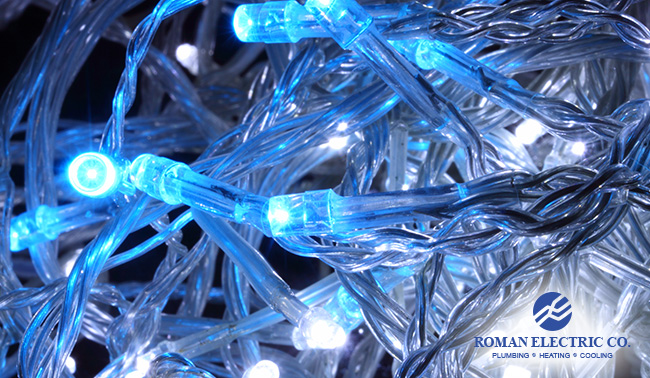 We have talked about LED lights a lot before, but that’s because homeowners should know how important they are. These lights have great features that distinguish them from their incandescent counterparts, making them good for various uses including as Christmas lights. If you’re not sure why you should choose Christmas LED lights, let the pros at Roman Electric convince you!

One of the best qualities about LED lights is that they are energy-efficient. According to the Department of Energy, residential LED lights can use at least 75% less energy while lasting 25 times longer than incandescent lighting. If you replace five of the most frequently used lightbulbs in your home with ENERGY-STAR LED bulbs, you can save $75 per year. So, if you’re looking for Christmas lights this year, consider using LEDs instead of incandescent bulbs to save up on your utility bill!

2. They Can Be Safer

Christmas LED bulbs do not have to be made of glass. These bulbs can come in epoxy lenses, making them shatter resistant. In addition, LED bulbs do not radiate heat, so you won’t have to worry about burning your fingers when fixing up the lights. This specific feature makes them a better option than incandescent bulbs and even CFLS – which are considered a better alternative to incandescent lights.

LED lights seem to get better with each year—the same can be said for Christmas LED lights. There are various Christmas lighting options on the market, with lights being sold in different colors, shapes and sizes. In addition, they have a lot of features such as timers and dimmers, allowing you to control your Christmas lighting.

4. They Can Work in Cool Temperatures

If you live in a particularly cold climate and you’re worried about your lights faltering, you should consider LED lights. These lights have no problem working in various weather conditions, making them more durable. LEDs can get more efficient as the temperature outside gets lower.

LED lights are the most environmentally friendly option on the market. CFLS contain toxic mercury which can be harmful to you as well as the environment. LEDs don’t have any mercury, making them a greener alternative. LED lights are also 100 % recyclable—so not only are they energy efficient, long-lasting and shatter-resistant, they are far better for the environment than other lighting options.

One Thing to Keep in Mind…

While LED lights have excellent features, they also have a high up-front cost. Incandescent bulbs are relatively cheaper, which is the one quality that gives the standard bulbs a bit of an edge over LEDs. However, it is also important to note that while incandescent lights might be cheaper, they might be eating a large chunk of your electricity bill over time. LEDs are expensive at first but will save you some money in the long run.

Light Up Your Home with Roman Electric

If you want to learn more about why you should choose LED lights, get in touch with the pros at Roman Electric! Call us today at 414-771-5400 or schedule a service on our website!