Roman Electric Stands Behind Its Quality Service – As Do Our Customers!

Roman Electric has been a trusted name in electrical contracting since 1929. Our award-winning, family-owned business has flourished through three generations of dedicated management. The cornerstone of our success has always been exceptional service; a fact that has ensured customer loyalty and continued growth well into our ninth decade of business. 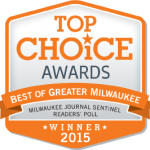 We want to thank everyone who voted Roman Electric for the Top Choice for Electrical Contractor in the 2015 Milwaukee Journal Sentinel readers’ poll.

This generous response from our satisfied customers means many recognize our goal to provide excellent service and always put their needs first. We would be delighted to win you over as well!