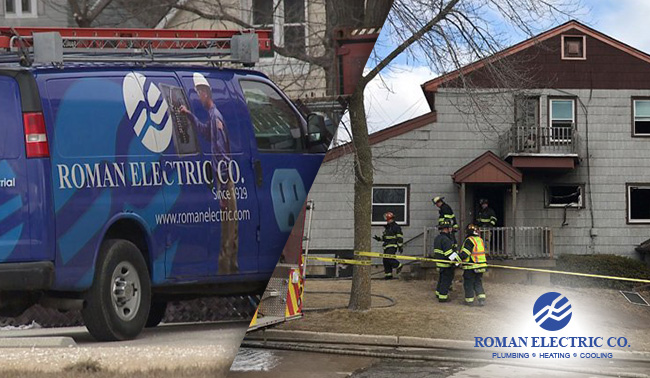 What do Roman Electric employees Chris Rassette, Jack Schoeppe, and Brian Pape have in common with the legendary superhero Superman? For one, they all wear uniforms while on the job. But more importantly, when there’s someone in trouble, they all immediately spring into action to save the day.

This statement especially held true back in March, when the three Roman Electric employees noticed a man and his infant daughter trapped in a burning house right next to their office.

Angel Suarez, 48, and his 1-month-old were unaware of what was to happen on March 12th. Due to a faulty extension cord, a fire had started in Suarez’s home, and it wasn’t until the smoke detector had gone off that he finally noticed.

“It was getting louder and louder and got up and seen the smoke detector blinking,” said Suarez.

By this time, however, the fire had already spread rapidly, and Suarez was quickly trapped in his room off 70th and Dickinson. Eventually, due to the smoke inhalation, Suarez fainted for a short period of time.

“I fainted for like 15 seconds and then I seen my baby on the floor,” he said. “There was no way I can die here and have my baby die here. I picked her up and got the energy to go out the window.”

Using what little strength Suarez had left, he grabbed his daughter and attempted to open the room’s window and call for help. However, no matter what Suarez did, the window would not budge. His time was running out fast.

But then, three Roman Electric employees who were at the office next to the burning home noticed the man and his daughter in peril. These employees, Rassette, Schoeppe, and Pape, immediately took action.

“I gotta get outta here. I gotta get my baby out. I didn’t care about me. I just wanted her outta there,” said Suarez.

Suarez managed to get a second window open by breaking it, allowing Pape and Rassette to assist Suarez and his daughter out of the house through the window. Suarez made sure his infant daughter was the first to be safely removed from the situation.

“Had the baby in my hand and I told someone ‘please grab my baby.’ He grabbed the baby and I jumped out the window,” Suarez remembered.

As soon as Suarez and his daughter were out of the house, Suarez then notified the employees of another tenant trapped on the second floor. Without a second thought, Schoeppe grabbed his ladder and aimed it next to an upstairs window. After climbing up the ladder, Schoeppe managed to help a second man down the ladder to safety. There was a third man trapped on the same floor, but due to the heavy smoke Schoeppe was unable to save him.

Deputy Chief Aaron Lipski of the Milwaukee Fire Department commended Rassette, Schoeppe, and Pape for their brave efforts, explaining that without them the situation could’ve been much more severe.

“This could, unfortunately, have been much much worse for all involved,” said Lipski. “These folks exercised some outstanding judgment.”

The president of Roman Electric, Phil Rose, also had something to say regarding the rescue.

“…This situation developed quickly and was incredibly intense,” Rose said. “Brian, Jack and Chris are all heroes!  They put their own lives at risk to help some people they had never even met, and actually saved their lives.  I’m so proud of these guys.”

The Milwaukee Fire Department and Alderman Michael Murphy have recently honored Rassette, Schoeppe, and Pape for their brave and heroic actions. The IBEW (International Brotherhood of Electrical Workers) have also awarded these men with a “Challenge Coin”, an accolade given to members for outstanding contributions.

For nearly 70 years of service and 3 generations of families, Roman Electric has served the residents of Milwaukee. And to this day, we are still proud to call this wonderful community our home. The bravery shown by Rassette, Schoeppe, and Pape only exemplifies how much effort Roman Electric puts toward ensuring our neighbors are safe. We believe these men deserve great honor for what they’ve done. And we are proud to share their heroic story.