LEDs vs Fluorescent Bulbs: Which is Better? 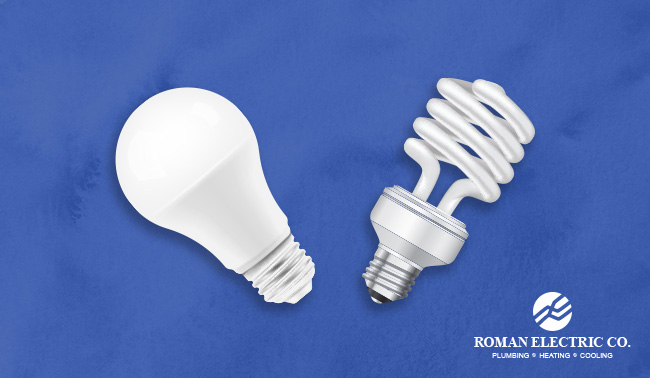 Most businesses have office lights – or something similar – and more often than not, they’ll have one of two types of bulbs: fluorescent and LED. At least, that should be the case, because incandescent bulbs have been proven to be inefficient with a short lifespan, so it’s high time that they get left in the dust.

That leaves the two aforementioned choices. Both fluorescent bulbs and LEDs are quite common, and logically they each have to be solid options to light your business, right? Otherwise they wouldn’t be used quite so often. The question remains, though: which one is more advantageous?

Well, the answer isn’t quite as cut-and-dry as you might’ve hoped. There are distinct advantages for one, and similarly clear pros for the other. Don’t spend a ton of time scouring the internet for the differences, though – we’ve got you covered. The pros at Roman Electric have condensed the comparison down for you so you can make an educated decision that is best for your situation.

Why LEDs Are Better

Let’s start with LEDs, or Light-Emitting Diodes. These bulbs don’t use a filament – they emit light through the power of electrons instead, charging these molecules and using that process to create a visible light.

Why Fluorescents Are Better

Fluorescent bulbs look like they’re getting blown out of the water in this comparison, but don’t declare LEDs the winner quite yet. These bulbs have plenty of merit on their own. They, like LEDs, don’t use a filament to emit light. Fluorescent bulbs send a jolt of electricity through a gas called argon, which hits mercury and in turn creates visible light.

Which Is the Winner?

At the end of the day, there isn’t one type of bulb that holds enough clear advantages over the other to declare it the undisputed winner. Which one you decide to use will just come down to what you value most in a bulb – if you prefer cost-effectiveness and greater coverage, a fluorescent bulb is for you.

However, someone that wants longer-lasting bulbs and a safer environment would probably go with an LED. Whichever you decide to go with, let Roman Electric handle your installation. Our electricians are well-versed in all kinds of lighting, and we’ll take proper care of your business.

For the most reliable residential and commercial lighting service in Milwaukee, give us a call at 414-771-5400!