How to Prevent Electrical Overloads 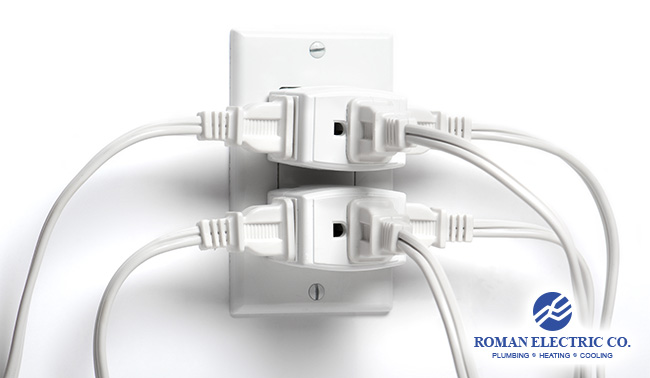 It’s nearly impossible to enjoy a modern living situation at home without using copious amounts of electricity. Nearly everything we use requires it, so it’s no surprise that we run into electrical problems in what seems like entirely too often. While most of the time these surges aren’t a problem, all it takes is one unexpected jolt to fry your delicate electronics for good.

That’s why it’s important to know how to prevent electrical overloads. If you’re an informed homeowner, you can ensure your circuits never experience this dangerous problem and stay safe and sound. All it takes is some careful adjustments – and perhaps a bit of math sprinkled in – and you’ll be on your way!

To help guide you along, the electrical experts at Roman Electric have compiled a simple list of three ways you can help prevent electrical overloads at home. Don’t worry: they’re safe, easy, and super quick to perform!

What Is an Electrical Overload?

Electrical overloads happen when the amount of power that a circuit is exposed to is greater than the load it can bear. In more conversational terms, imagine trying to carry more groceries to your door than you can pick up. Eventually, those bags are going to break and a problem goes from inconvenient to disastrous.

Thankfully, most circuits involve tripping a breaker when the power load gets too much to bear, so your system has built-in safeguards to prevent really bad problems from occurring.

How Do I Stop Them?

The easy answer to preventing electrical overloads is to simply manage the amount of current that each circuit is responsible for. That’s easier said than done, however. Finding out how much each circuit can carry requires a bit of math.

There should be a number on each circuit that lets you know how much it can hold, and you should aim to take up less than 80 percent of that number. Any higher, and the breaker should trip.

Once you’ve done that, just compare the total to the amount that each circuit can hold. If it’s too high, then move some plugs around so the levels balance out.

In addition to redistributing your plugs, there are a few other ways you can maximize your home’s electrical capabilities.

Double-checking your home’s electrical load-bearing ability doesn’t need to be an ordeal. It only requires a bit of re-arranging (and maybe a calculator), but you’ll be safe and sound in no time. Of course, Roman Electric can take care of all the dirty work for you! We can evaluate your home’s condition and determine the best course of action, which includes devising a solution that is created specifically for you.