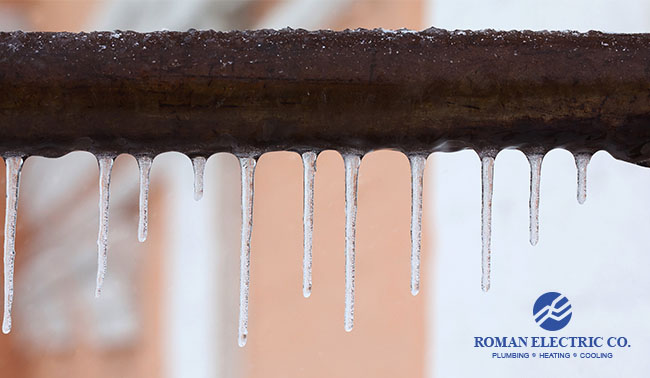 As we know up here in Milwaukee, the cold weather is something we’ve got to deal with more than other parts of the country. Snow and ice are a regular obstacle, and they bring their own complications with them. On top of the weatherproofing strategies we use to keep our homes and ourselves protected, we’ve also got to deal with frozen pipes.

They grind our daily lives to a halt, and until they thaw, there’s not a whole lot to be done about it. That’s why it’s so important to know just how to avoid this potentially serious issue in the first place. Here are a couple of foolproof ways to avoid frozen pipes from the pros at Roman Electric!

This is arguably the most well-known tip for avoiding frozen pipes, but it still deserves mentioning. It’s amazing what even a small amount of running water can do. When water stops flowing and can sit in one spot, your pipes freeze in a hurry.

Run your faucet, even just a bit. A consistent flow, one that produces a drip as thin as pencil lead, for instance, will do the trick. That prevents water from stagnating, which makes it harder for it to freeze!

If the running faucet tip was up for the honor of “The Thing Everyone Already Knows About,” then opening your cupboards is a close second. You’ve likely heard this one passed down from generation to generation, and for good reason.

Open the cupboards that shield the pipes underneath sinks so they’re exposed to air and aren’t closed off from everything. Even if it doesn’t have the same effect that, say, direct heat would, it still does enough to make a difference.

The thing about pipes is, they’re everywhere. You don’t just have a few exclusively in one spot in your home – they wind and twist all over, which makes it hard to protect all of them from the cold. In spots like the basement, where it’s naturally chillier and where pipes are exposed, it’s even harder.

Take some time to wrap and insulate these pipes that are more susceptible to freezing. You’ll add an extra layer of protection to these vulnerable spots and decrease the likelihood they freeze.

If the worst-case scenario does occur and your pipes do freeze, then you need to know what to do. Your instinct might be to try and thaw them yourself, but you shouldn’t ever use something like a torch that could damage the pipe itself.

What you should do, however, is know exactly where your master shutoff valve is. If a pipe bursts, you need to cut off the water supply as soon as possible to prevent any serious damage from occurring. It’s also a good idea to know your plumber’s contact info so you can call them when you’ve got an emergency on your hands.

Whenever disaster does hit, don’t look any farther than Roman Electric. Our team is equipped to handle all of your winter home service issues, from electrical issues to – you guessed it – frozen pipes.

Just give our team a call at 414-771-5400 and get in touch with us! We’ll handle your request professionally and quickly, and we’ll get it done right the first time.