7 Reasons Why an Outlet Isn’t Working 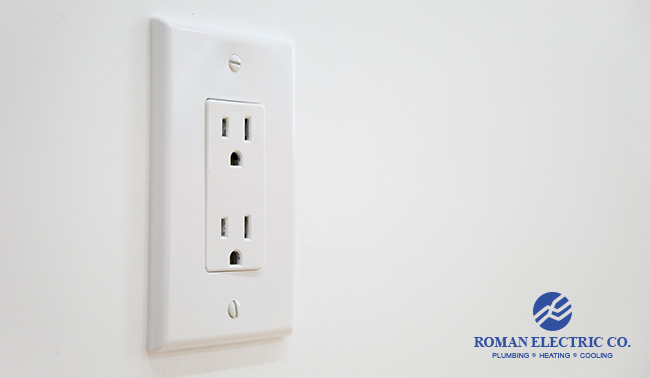 For most people, what lies behind an outlet is a mystery. So, when a plug stops working, homeowners often have difficulty diagnosing the problem. Broken outlets are something that most homeowners encounter with relative frequency. Fortunately, most cases of broken outlets can be solved without calling in a professional. The electrical experts at Roman Electric are here to help!

Circuit breakers control the electricity flowing to each room in your home. When there is too much electrical current flowing through the circuits, the breaker will ‘trip’ or cut off to keep the circuits from overheating and causing damage.

If an outlet isn’t working, check your circuit breaker panel. The breaker that is tripped will appear to be between the ‘on’ and ‘off’ position. Flip the switch to off, then back to on. This will reset the circuit and potentially fix your broken outlet.

If your electricity is operated via fuse box, your problem could lie with a blown fuse. Check your fuse box for melted metal pieces, or discolored glass. Once you’ve identified the broken fuse, unscrew it, and replace it with a new, identical, fuse.

Ground Fault Circuit Interrupter (GFCI) outlets shut themselves off when they detect a short. GFCI outlets are used in areas where water is present, like near the kitchen sink, and in bathrooms, to protect against electrical shock. You can identify them by their ‘reset’ and ‘test’ buttons, placed between the two plugs.

If your circuit breaker isn’t tripped, but a GFCI outlet isn’t working, the outlet itself might be tripped. Reset all the GFCI outlets in the room by pushing the reset button.

Sometimes outlets literally burn out. Strong electrical currents can create small fires in your wiring, causing an outlet to stop working. If an outlet shows any blackening, a small fire has occurred, and the entire outlet needs to be replaced. Burned out outlets are serious fire hazards and should be fixed immediately.

Fixing your outlet could be as easy as flipping a switch. Half-hot outlets have one plug (usually the lower plug) that is controlled by a wall switch. If you have an outlet that’s half-hot, flipping the light switches in the room will activate the outlet.

This step is where you might want to call in a professional. Loose wiring could be the cause of your broken outlet. To check your wiring, you need to first ensure that the breaker is off. Then, remove the front plate of the outlet and the screws that attach it to the wall.

Pull the outlet a few inches out of the wall. Inspect the wires that connect to the outlet. If any of the wires are loose, you will need to reposition them and tighten the screws that hold them in place.

Though its uncommon, outlets can be defective. If you have exhausted all the steps above, you may simply need to replace the outlet. If you intend on replacing it yourself, be sure to turn off the breaker. Then, remove the outlet cover and carefully disconnect the wires with a screwdriver. Reconnect the new outlet by reversing this process.

Electricity is dangerous, so if you don’t feel completely comfortable investigating a broken outlet yourself, call a licensed professional, like the ones at Roman Electric! Our team has years of experience and knowledge helping our neighbors navigate tricky electrical issues. We’d be glad to help make sure your household stays safe around potentially dangerous electrical hazards.